Saturday night and I’m sim jumping. On the fifth hit, I land on Starport Omega (Felice 234 96 500). For five years, Kimberly Uriza has enjoyed the role of Captain (and co-captain) of this wonderful build. Science Fiction fans will love the futuristic features of this venue. 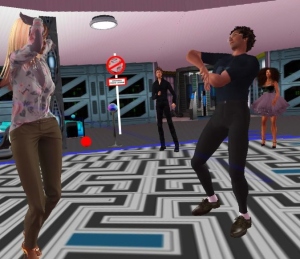 Asked why she chose a space port, Kimberly replied, “I’ve always been a Science Fiction fan and I wanted to have a space ship in Second Life. And the idea had never been done for a venue, as far as I know, so I wanted mine to be unique. Starport Omega tends to fit the format of Progressive Rock Music.”

Of course, it’s a custom build, which Kimberly worked on. It took her awhile to find just the right textures for everything.

She was inspired the moment she began experimenting with building.

“I started to create a theater in the round, which I think is also unique in Second Life. The spaceship in back is a freebie I found which I re-textured and added some things to,” she then informed me about the current schedule. “We have DJs four nights a week on Sunday, Wednesday, Friday and Saturday. Live music is featured twice a week. Anj Gustafson on Tuesday and Moshang Zhao on Wednesdays.